With so many amazing locations across the country worth mentioning, SportsEvents hits the road to highlight destinations, sports facilities, and event. Look for regular updates as we travel coast-to-coast, bringing you updates on the best places to stay, eat and play.

When people ask what was m

y favorite part of my visit to Portland, Maine, I’d first say the city’s harbor and lifestyle were my favorites. Then I’d quickly add that the snowfall on my first night in town was awesome. And then again, maybe the choices in fresh local seafood and farm-to-table options. Or maybe the breweries or the people. You should understand that I loved everything about my time in Maine.

I had the opportunity to spend a few days in the original Portland, thanks to Visit Portland Maine. If you’ve never been to Maine or Greater Portland, I suggest you give it a try. It’s a charming city that has retained much of the Colonial-era architecture, cobblestone streets, and some lively characters who call the city home.

Situated on the Portland Peninsula near Maine’s southern border, this area is a popular vacation spot for nearby residents in Boston, New York, and New Jersey. Apparently most visitors from all over United States are from Texas. Our group theorized that Texans see Maine as the place most different from their own state. Just a hunch.

We traveled to Maine during the year’s second Nor’easter. They’ve had four Nor’easter’s this year and I can tell you that most folks are tired of it. It’s been a rough winter for the Eastern seaboard and locals are vocal about the long stretch of bad weather, including a cyclone bomb that hit earlier in the month. But they are a resilient bunch of people.

On my arrival to Portland I headed to the hotel bar at the Holiday Inn by the Bay Portland for a late dinner. I overheard the bartender telling a young couple that they would be able to move around the city even though 18 to 20 inches of snow were predicted for the next day. “The snow might be a hassle, but you shouldn’t have any problems,” she assured. “Snowplows will take care of it and you’ll probably see people cross country skiing and snowshoeing to work.”

The next morning, I told my group of fellow journalists what I’d heard about snowshoeing and cross-country skiing through city streets and we all kept a watchful eye for photo opportunities.

We had lunch at RiRa Irish Pub & Restaurant in the historic Old Port area with views overlooking Portland Harbor.

RiRa’s downstairs is like stepping into a traditional Irish pub with rich wood accents, a crackling fire, dark and inviting lighting, and the trappings of a bar influenced by seafaring patrons. We dined upstairs in the Harbor Room, a recently refurbished space with modern influences and floor-to-ceiling windows overlooking the port. The Harbor Room and the Main Dining Room are designed to accommodate events large and small, and the chef sources local foods including meats, cheeses, and seafood from the area.

Back outside, the snow was just beginning to fall as we made our way to Brick South, an event space in Thompson’s Point. With rough-hewn wood and steel beams, brick walls and soaring ceilings, this facility harks back to its industrial past. The venue now offers catering, bar service and flexible space for unique events.

Thompson’s Point also has an outdoor venue behind Brick South adjacent to a recently restored section of the Union Station platform that was moved to the area in the 1960s. The outdoor venue on the Fore River hosts concerts and festivals and will be linked to nearby downtown for easy walking and biking access. The site includes a circus school, a nano-brewery, distillery and winery and a cryptozoology museum in addition to places to eat or shop.

The Children’s Museum of Maine is also relocating to Thompson’s Point to join the growing development.

We were headed to a wine and cheese tasting at Cellardoor at The Point when we spotted what appeared to be Bigfoot in front of a chicken diner. The International Cryptozoology Museum is the only one of its kind in the world. Loren Coleman, president of the board is the 70-year-old founder and director of the museum, which showcases books and contents from his research. The museum includes exhibits about cryptids such as Bigfoot & Nessie, in addition to information about other famous discoveries, including hair samples from the abominable snowman and fecal matter from a small Yeti.

While this was interesting, the wine and cheese were waiting for us at Cellardoor Winery a few doors down. Britta Livonius, Cellardoor’s wine expert and event and operation manager explained the wine-making process and allowed our group to sample a variety of wines in the modern dining room at Thompson’s Point. The venue also includes a large tasting room and marketplace. The Winery and Vineyard are located in Lincolnville, Maine.

After the wine and cheese sampling, we headed back to the Holiday Inn by the Bay where Sally Page and her staff treated us to hors d’oeuvres in the Port of Call Lounge where we sampled some New England cuisine – yes, there were several lobster appetizers, of course!

The next day, our host, Elissa, with Visit Portland arrived with a 4-wheel drive vehicle to shuttle us around for the day to make sure none of us ended up buried under the heavy snow that had fallen throughout the night.

The Cross Insurance Arena was just down the block and we made our way over snow mounds to tour the venue which hosts sporting events such as hockey and basketball in addition to concerts, exhibitions, and shows. 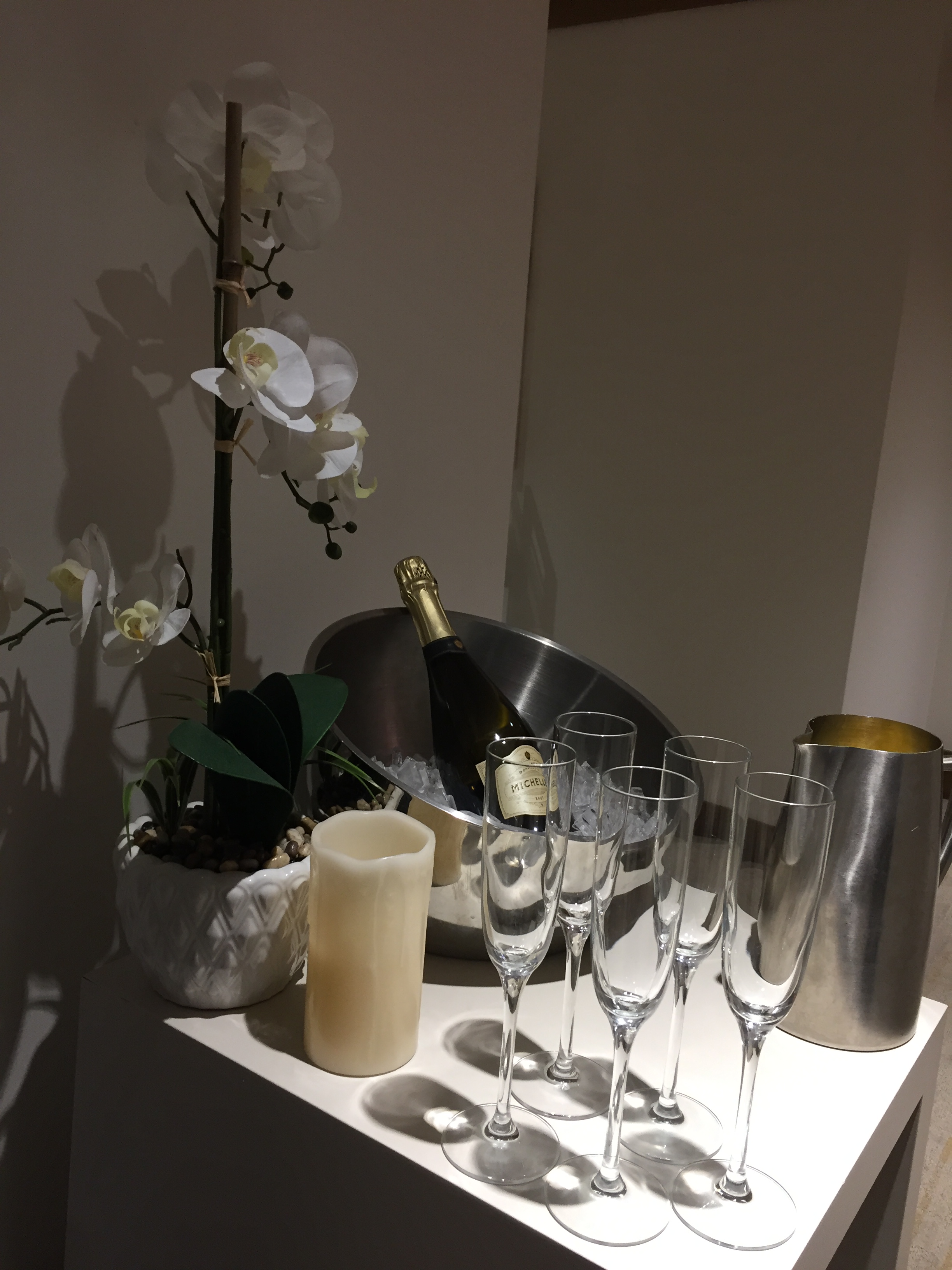 From there we made our way to the Westin Portland Harborview Hotel for breakfast and a spa treatment before meeting with the new general manager, Joseph Dadiego for a tour of the meeting space.

The snow was still falling as we participated in an escape room challenge at the Escape Room. We finally made our way out with the help of more clues than we were probably allowed. It was a fun way to spend time with a group.

Afterward, we toured The Press Hotel, a property that was once the Gannett Building, which housed the offices and printing presses of the Portland Press Herald in the Old Port District. The boutique hotel now remains many nods to its newspaper days with artwork constructed of typewriters, newspaper headline wallpaper, and pieces from the printing presses.

Following the tour of the penthouse suite, meeting rooms and artwork, we moved to the Union, the onsite restaurant featuring farm-to-table cuisine under the direction of Executive Chef, Josh Berry.

Berry, a Maine native, stopped by the table to discuss his menu, which relies heavily on locally sourced vegetables, herbs and offerings from nearby. Here, I enjoyed my first lobster roll. Berry’s version called the Upper Exchange Lobster Roll was prepared with lemon mayonnaise with shaved lettuce and snipped chives on a New England top split roll accompanied by fingerling fries. OMG! I could eat this for every meal and never get bored.

With full bellies, we made our way to Dean’s Sweets where we learned to temper chocolate. This shop specializes in Maine-made, hand-dipped truffles, caramels and other small-batch chocolates. Owner chocolatier, Dean Bingham and his wife and co-owner, Kristin Bingham use regionally harvested ingredients such as maple, salt, and butter, fruits, and spirits to make these delicious treats.

Continuing on, we checked in to the Portland Harbor Hotel where Linda Prescott, the director of sales was our host. This property in the old port district features 101 renovated upscale guestrooms. My room was overlooking the enclosed courtyard which was covered in a beautiful white blanket of snow, but the large fire pit was lit for a magical view. After dinner at Scales on Commercial Street on the wharf, we headed back to the Portland Harbor Hotel. The next morning, we joined Linda for a tour of the property and breakfast at the hotel’s BlueFin Restaurant. Chef Tim Labonte recently won the Incredible Breakfast Cook-Off during Maine’s Annual Restaurant Week for his Lobstah Hash – lobster served with chervil-infused mascarpone and root vegetable-and-corn hash.

As it turns out, Portland is a foodie city and almost anywhere you choose to dine there is a good possibility you’ll sample food from a James Beard Award winner.

We also learned about the Inn at Diamond Cove. It’s situated at the site of the former Fort McKinley, the largest of five military complexes constructed in Portland Harbor in the 19th and 20th centuries.

Revamped, the old fort which protected the city from potential outside invaders is now a unique venue for corporate gatherings, weddings, and retreats. The barracks were transformed into an inn and the lawn is a location for outdoor events, including a classic lobster bake. Just off the Casco Bay, the inn is reached by ferry or boat and is only 20 minutes from the downtown Portland waterfront. Locals said catching a charter on the Joseph S. Kennedy UB85 boat is a fun way to arrive on the island.

After breakfast, we boarded the Maine Brew Bus for a behind-the-scenes look at some of Maine’s craft breweries and distilleries. We had a great tour guide and a driver who did not imbibe, so the trip was a safe way to sample some of the local scenes. Our first stop was to Sebago Brewing Company’s new home where the aroma of a wood fire or possibly barbecue filled the air. While the back of the building was abuzz with workers connecting lines in preparation for brewing and canning, the front of the house delivered a nice flight of the special craft beer that makes these Maine brewers so popular. Stop in and say hi to Kai, Brad, and Tim if you are in the area.

Maine Mead Works is a business that uses wildflower honey, water, and its own yeast strain to bring the world’s oldest fermentation process into the 21st century by making a mead called HoneyMaker. With a sampling of the Blueberry, Apple Cyser, Lavender, Ginger, and Chai, we enjoyed a good representation of the offerings. This location is worth a try if you ever want to sample or buy good mead. Even if you think you don’t like mead, you will probably like this refreshing and crisp beverage. They also ship products through the online site.

Next door, Hardshore Distilling Company is a different kind of distillery. Jordan Milne, the founder/distiller explained that he makes gin with botanicals for a bright, distinct flavor. The grain is grown on the founders’ farm and the product is distilled on-site in a 1,200-lite Arnold Holstein still. More products are being developed.

While at Hardshore, we enjoyed a boxed lunch from Sisters Gourmet Deli before heading to the Portland Museum of Art for a tour of the new exhibits and artwork currently on display.

Finally, we got a behind-the-scenes look at the making of unique bags made of sails. Sea Bags takes sails from sailors and refashions them into bags that are worthy of the runway or a day at the beach. Apparently, the used sailcloth is cleaned and then brought to the storefront location on the old port in Portland where they are cut, designed, and stitched. Many of the bags make their way to the small store, while others are specially designed for customers. Stop by Sea Bags if you’re in Portland to see the wide variety of bags and accessories available. If you have a sail to trade, Sea Bags says it will trade for a product or as a donation to teach a child to sail. Sea Bags has reclaimed more than 500 tons of sails since 2017 that would have gone to a landfill.

There are plenty of other things to do if you are ever in Portland. Check it out.

Editor’s Note: This is an update to the original article.